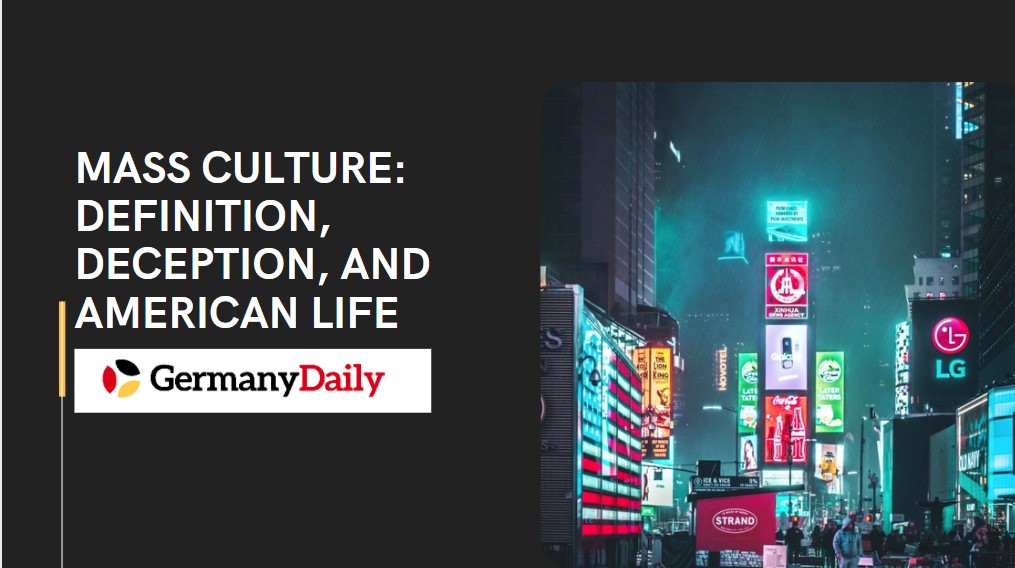 Culture is probably one of the most diverse words in the English language and it can have many meanings. There is high culture, pop culture, and mass culture that are very common besides this you can find even sports culture, gay culture, entertainment culture, or maybe people suffering from Culture Integration or Syndrome, but our focus in this article would be to talk about mass culture.

What is Mass Culture?

Mass culture refers to the things produce for a very large audience in big quantities,. The example of mass culture can be television shows, movies, sport, etc. You see that the audience for these things is not confined to one place or a demographic but rather it is beyond it and millions of people consume such products.

The history of mass culture – The American Life One of the earliest Televisions

We can say that from 1900-1945 the mass culture came into being and it passed its stages of infancy and matured. American life and American society played the most vital role in this. It coincided with the development in informational tools like Radio, Photography, Cinema, and television and how formality and written literacy was becoming more secondary. After world war 2, we can say that American society changed as a whole. Feminism was on the rise, the black people started fighting for their rights, a certain Muhammad Ali became one of the earliest global megastars from the USA. above all the eating habits of the Americans changed as the concept of fast food was introduced.

The people were demanding and the capitalist gods were seeking new opportunities, new ways to make them addicted to their products. They used megastars, they used the television, they used the radio, they used newspapers, they used pamphlets, they used the fax and large electronic billboards to increase their wealth, to empty their pockets and that is how the American life was changed and almost half a century later the whole world is a prisoner of the mass culture.

How mass culture differs from other cultures? A mass culture unlike folk culture is oriented toward profit and loss. This is in the hands of big organizations who have invested billions of dollars and in the end, their aim is to generate revenue from this. Mass culture can also be called anti-traditional culture because it takes a3way people from the traditional ways of life. when the production of something is taken from the hands of the common people to the factories and other mass production outlets then the traditional value is lost.

An example of something losing its traditional value is the carpets. They used to be made with hands all around the world and the quality they had was unparalleled. It was just not about the quality, the preservice of the traditions behind it and the way the people from far-flung areas made money out of it was taken by the rich to mass-produce it for the mass audience for the sake of mass culture and the traditional ways, the way it bounded families, the stories behind the carpets was all gone. This is a theory created by the Marxists and it tells us how in capitalist societies the mass culture is used as a means of exploitation. According to Adorno, the culture in the capitalist societies is more a commodity and it is only there to satisfy the psychological needs of the people which is also not a real psychological need for any human but it is created through shrewd methods to make us a slave of the big capitalist corporations.

Mass culture and the widening gap between rich and poor

Mass culture is a product of capitalism as stated in the cultural industry theory of Adorno. For many people around the globe, capitalism is the exploitation of the masses by a selected few. The term mass culture is coned in such a way that it represents something very sacred the “culture” but indeed this in most cases is forced upon us and culture is never forced. I will give you an example of the fidget spinner. It was marketed in a way such that it was sold to the masses around the globe which resulted in them shelling out millions of dollars for a toy that was just a mere gimmick.

The fidget spinner was invented in Japan to help the kids suffering from autism combat the diseases but the greedy few of the world took it and imposed it on us using memes, influencers, and other means of marketing and made a profit from it. The select few of the world are increasing their wealth even during the deadly pandemic around the globe while the poor suffer and they become more dependant on them as the day passes by and are psychologically tricked using the mass media to buy things that are not going to benefit them.

In the past, it was not this easy to spread the production done on a mass scale but in the information age, there are very easy ways to manipulate people to open their wallets. We will shed light on some notable tools that make the mass culture. We already know about TV, Radio and Newspaper and how it spread the word so we will not touch on them as they are not the modern tools.

Memes are everywhere. It was supposed to be for the geeky types but now everyone has accepted it. A meme is something that can be created by anyone about anything. You have seen memes about politics, science, sports, and even religion have not been spared by memes. Memes are now part of our culture and many people have adopted them as a means of marketing. Memes are used by multi-billion companies to sell their products to us either directly or indirectly. The mass culture uses memes to take their product to the consumers.

Using memes is a very clever way to sell your products on a mass scale. The reason behind it is that you can mould it with respect to different cultures and traditions around the globe. The memes are used by big companies like Gucci, Burger King etc. There are different ways to psychologically play with the minds of the audience.

One of the examples of this is the war created between Cheetos and Doritos on Twitter. Both are from the same parent company, PepsiCo and yet they were fighting with each other on the social media platform Twitter through memes. An example of meme marketing

The emergence of social media platforms like Instagram and TikTok has given rise to the importance of paying the mid and low-tier celebrities to influence the people and help in the spread of mass culture. They will put a review which can be honest or dishonest, they talk good about the product or just write a blog post on it for which they are paid or other benefits are given to them. This influences people around the globe into thinking the product is good and if they don’t buy it then they are missing out on something.

The megastars have always been used and are the masters of spreading the mass culture. An example of this is Jordan who is affiliated with Nike for ages and has made a fortune out of it. The other example of someone at the summit is Elon Musk, who is using his influence to take crypto coins that have no value to be at the top but his one tweet makes people buy them.

Right now we are not humans. Yes, you heard us right! We are not. The Social Media apps you use, you are a product to them and they mine your data and earn billions. The juice you buy, you are not a human for that company they do hidden test and trials to see what is your behavior, and this is the case around the whole globe. The mass culture is responsible for this, the select few manufactures products in bulk and then indirectly forces people to buy the products.

Can Dogs Eat Avocado? 10 Things You Must Know

Ten Signs Your Male Friend Has Feelings For You