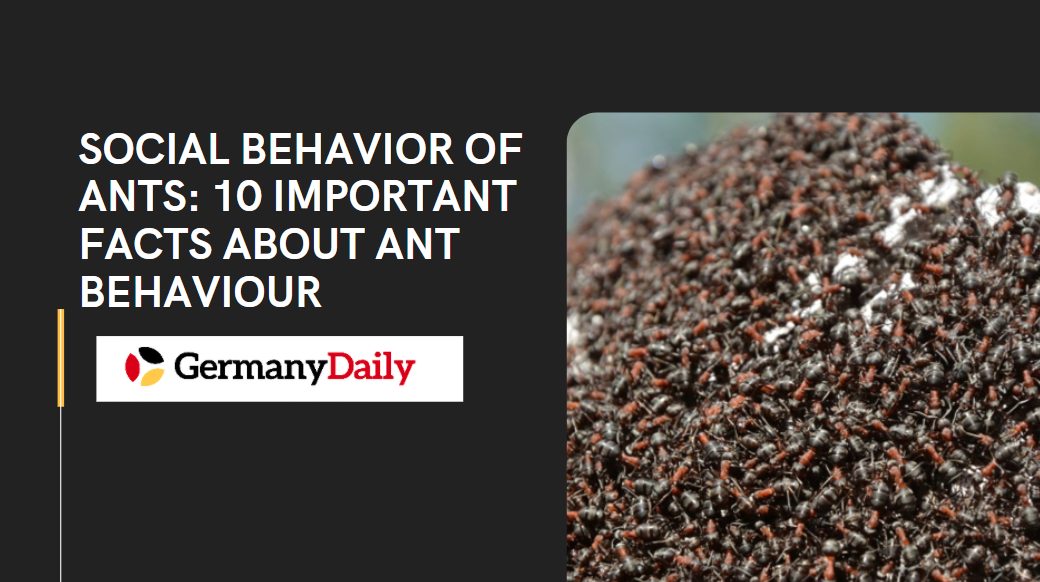 Harvard conducted a study that concluded that ants are older than dinosaurs and originated about 130 million years ago. They have survived the ice age, and the extinction and the social behavior of ants is something we should know, and in this article, we have compiled some interesting facts about this. Ant Colonies Have Rules And Regulation

The ant colony is an important thing you should know about before studying the social behavior of nats. The ant colony shows us how the ants live physically, and if we microscopically study this colony, we will find the rules and regulations the ants follow.

You can physically see them in the shape of anthills, but if you call what you see with your naked eye as the ant colony, then you are mistaken; it goes as deep as 30 ft, and down there, you will have a complex social structure to observed. In the ant colony, you will find different types of ants who have a specific function to do, and they have a hierarchy in the place.

First of all, there is the queen ant; the primary job of the queen ant is to populate the ant colony by laying thousands of eggs. The average life span of the queen ant is about 30 years, and it is the most giant ant in the territory, with wings. It has predators like the jumping spider so to protect it; the queen ant lives in the deepest chamber of the anthills.

Drones on the other hand, are male ants who help the queen ant to lay eggs by mating with her. As soon as they mate, the drone ants die.

Offsprings of the queen

The offsprings of the queen sometimes develop wings and they are called alates. They migrate from the anthill and try to create a new colony. For them, migration is easy because of their wings. A queen is chosen, workers are chosen, and drones are chosen; reproduction happens in the new society, which leads to migration and this cycle continues. The fire ant colonies consist of ants that are very aggressive, red in color, and out of control as their queen lays 1000 eggs each day, and getting rid of them is not easy. There have been reported deaths from the bites of fire ants, it is very rare but it has happened. It causes the throat to swell up, the body turns red and the person meets his or her fate. Super colonies are ant colonies that are synced with each other despite being miles away from each other. The most common supercolonies are formed by the fire ant and it is one of the best examples of integration in insects and animals. Even humans can’t integrate as well as these ants do even though they are separated by a big distance. Every colony has its own set of ants with a queen and all of them work in cooperation for the betterment of each colony.

The carpenter ants can be called sugary ants. They work in a systematic way to get food out of your house into their colonies. If you ever squash a carpenter ant. You will see they have a sticky substance, and it is all the sugar they feed on. The carpenter ants also have multiple queens, but they live in the same nest and not miles away from each other, and a carpenter ant’s colony can be home to thousands of ants.

Antlers in the warm and humid condition of July fly in search of mates (gynes). In a process called a nuptial flight, they mate. This is called the flying ant day, and thousands of ants do this process. People often confused such ants with other insects like termites because of their wings.

They Rely on Fat Stored in Their Body

After mating, the queen is said to go into the ant nest’s deepest parts and don’t eat for weeks and rely on the fat stores in their bodies. They only start to eat again when their daughter offsprings are able to bring them food. In this period, they store the sperm from many males and use this store throughout their whole life to lay eggs.

Ants in a colony can synchronise their moves, and they use vibration to communicate with each other or sense food and danger. They have a special organ near their knee that help them sense vibration in the ground. Polyergus lucidus is a species of ants that invade other ant colonies to take ants as slaves, and then they make them work for them. They can decide to keep them forever or use them for a period of time and then release them.

Ants have a social structure at a place that is so complex that we would need thousands of pages to explain it, but these were some 10 handpicked facts about the social behavior of ants that can help you get a basic idea about them.

How Does A Gemini Man Express Love: 10 Major Signs

Culture Bound Syndrome: How Does It Work? With Examples