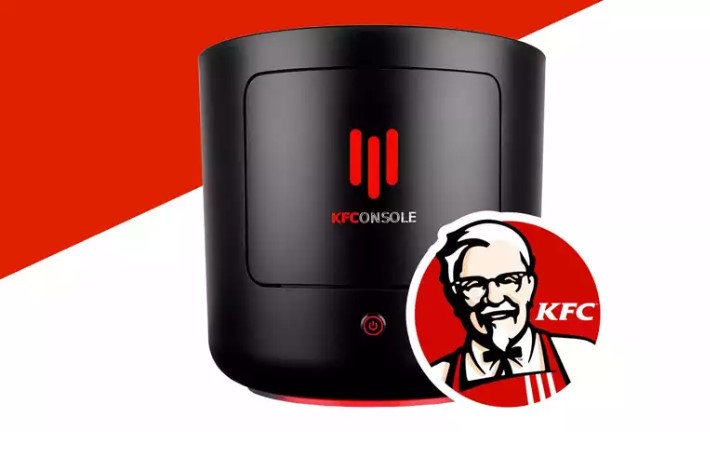 The name KFC never ceases to amaze us! I hope you may have come across many memes flooding over social media regarding KFC Console. KFC Gaming Console is an actual gaming device and is not associated with the food chain.

In June 2020, the master of finger-licking food joined hands with the gaming world. Yes, KFC announced a new gaming device to align with the PlayStation 5 and Xbox Series X. Called KFC Console, this gaming device comes with an excellent resolution of 4K with refresh rates of 24o Hz.

As it’s branded KFC Gaming Console, this device comes with a standout feature, i.e., Patented Chicken Chamber. Are you surprised, right? Not only you, almost everyone! KFC Console has a heated compartment designed to keep your fried chicken snacks hot while gaming.

Moreover, the design of this gaming console is impressive, as like its specification. This new KFC console design takes inspiration from KFC’s famous Bargain Bucket. The gaming console features a black-lit power button with a classy cylindrical black chassis and a cooling fan at the top of the console covered by a grill. At the top of all, the Chicken Chamber heating compartment makes this gaming console stands out from other gaming devices.

The upcoming console, KFC Gaming Console, comprises an impressive range of hardware support to provide a smooth gaming experience. Below listed are the components placed inside the KFC Console to give an amazing real-time gaming experience: –

As per the bits of information revealed, these are the specifications of the KFC Console. However, we can get more in-depth information once displayed on the market.

How Does The KFC Console Work?

The KFC gaming console may seem like a regular console until you look at the fantastic new feature – i.e., its patented chicken chamber. This has been designed with a motto to keep your fried chicken or snacks warm and hot during your non-stop intense gaming session.

The KFC console doesn’t use built-in heating elements to keep the food warm. Instead, it has been designed to use the heat produced by the console’s components. For example: if you have been using your PC for an extended time, you may be well aware of how much heat your CPU produces. KFC gaming console uses this heat to keep your food warm.

While seeing the social media flood with the fantastic features of the KFC gaming console, many people ignored it as marketing material for KFC. But, the fact is – KFC Gaming Console is actual! After announcing this gaming console in June 2020, it was stated that it would be officially revealed in December 2020.

It is to be noted that KFC has also made a lot of things in the gaming industry with the release of a themed controller for the Xbox Series X Console, a fried chicken keyboard, mouse, and USB Stick. Additionally, the Gamer’s Box 2.0 – comes out with a takeout box with a Bluetooth controller.

After knowing the impressive specifications and features, we can say that KFC Console will take your gaming experience to the next level!

With the reveal of this new console, you would be thinking about the games you can play on it as a game lover. Usually, all the latest PlayStation and Xbox consoles will announce their launch and the list of games that the console can support. However, such news has not been revealed with the KFC Console. KFC Gaming Device has yet to announce the games that the console will be able to run.

Based on the KFC Specs, it has been found that the console will quickly run the most demanding games in 4K resolution. Also, since the console comes with a swappable graphics card, gamers can customize the component and stay updated with the latest games. The KFC Gaming Console is equipped with the support of Virtual Reality for a fantastic and real-time gaming experience.

Even though this gaming console comes with an outstanding technical performance, the main point that stands in the gaming community is – its built-in heating compartment or a chicken warmer,

The KFC Console price is not yet revealed. However, considering the components used in this gaming device, we can expect a hefty price tag on this gaming console.

While analyzing the components of the KFC Console – the Intel NUC 9 Extreme Compute Element cost around $1000. The graphics card, RTX, and the virtual reality for the console are likely to cost approximately $250 and $500. Also, the SSD comes around $200, and the cooler master will be about $200.

While weighing the cost of all these components, the new KFC gaming console could be priced near $2000.

Should I Buy the KFC Console?

It purely depends on your choices! Maybe you’re a gamer and not a fan of fried KFC, or vice versa – in this case, it’s hard to ignore, as it doesn’t serve your purpose.

KFC Console makes a compelling look with its high-end components and specifications, and also it provides the best promising gaming experience ever. We do expect the console will be appealing to the one who loves new ideas, and we do think that the gamer will not find this gaming console to be valuable enough.

Moreover, the console’s chicken chamber sounds appealing and has a wow factor. But when it comes to storing greasy & oily chicken in the gaming device, it may sound luxurious, but it comes with many hassles like cleaning.

Therefore, if you wish to book a pre-order KFC Gaming Console, we advise you to look for more information before buying this gaming device.

Officially, the announcement was made in June 2020. But there is no evidentially proven information regarding the release date of the KFC Gaming console.

If you’re looking to pre-order the KFC gaming console, it’s advised to wait for any official confirmation regarding the release date and then book your order.

Recently, the KFC Gaming Twitter handle tweeted an update date, stating, “The KFC Console release date is.” Even this also didn’t provide any information to follow up.

That’s it! All these are the information currently available about the gaming console will be the most significant gift for gamers. The KFC gaming device will be a double treat with supporting games and a chicken warmer.

I hope you found this article helpful and interesting! Get ready to enjoy a fantastic gaming experience and crispy chicken using a KFC Gaming Console!