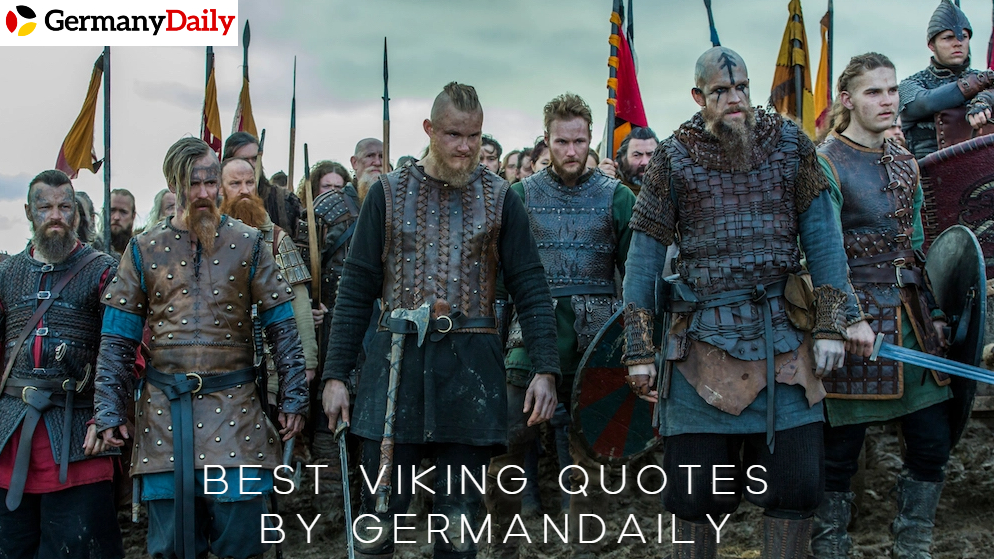 While many people relate Vikings with power, battles, raiding, and drinking. Many Viking quotes have shared insightful wisdom with the world.

Vikings might be relentless warriors, but they still have some of the best quotes that can inspire the best of people. Most people don’t know that Vikings were witty, charismatic, and gave out good life lessons.

If you are looking to find motivation, here are some of the best Viking quotes we could find.

These quotes will make you feel inspired and uplift your spirits. This might not seem like it, but actually, it is a deep quote. If you drink too much, you might end up saying or doing something that you’ll regret. This can be applied even if you don’t drink. Never say too much otherwise you will regret it later on.

“Better To Fight And Fall Than To Live Without Hope” Better To Fight And Fall Than To Live Without Hope

Failure is often better than not trying at all. Because in failure, you learn something from your errors. Instead of saying “I can’t do it” say “I’ll try it”. You never know what the outcome will be so might as well give it your all and be hopeful.

A Viking Knows That Knowledge Is Power Wisdom Is Welcome Wherever It Comes From

This is best used to describe Odin’s burning desire to always learn new things. You should always welcome wisdom and it shouldn’t matter where it comes from. Everyone has something to teach and you never know what you’ll learn. Never think that you know everything and always give people a chance to teach you something new. Viking quotes about vengeance and cowards

Your actions are often overruled by your emotions. This quote teaches us to handle our business promptly. At the same time, always know when to exercise restraint because that can go a long way.

Vikings cared about their families a lot. Naturally, they had many valuable sayings about family. We have listed some of the Vikings’ quotes about family below so feel free to read them and learn something new.

A Viking Is Nothing Without Family Kinsmen To Kinsmen Should Be True

This is an extremely important quote as it shows the real value of your family. You should always be kind and loyal to the people near you. Whether it’s your parents or siblings, always show them respect and kindness. Staying true to your family will go a long way and help you greatly in life. While this could be taken as a general quote, it also applies heavily to family. Always be good towards your family and people who take care of you. Always appreciate your parents and know that they are doing their best for you.

“He falls not whom true friends help forward on his way.”

True friends will be there in the darkest of times

True friends are like family. They will help you through your darkest times and be there when you are in need. This is why you should always be loyal to your friends and help them when they need it most. A good deed is always remembered.

Vikings were the fiercest warriors the world has ever known. They always loved battles and raiding. Here are some of the best Viking warrior quotes that you will find on the internet.

“Fear Not Death For The Hour Of Your Doom Is Set” This was the most common quote said by Viking warriors. They accepted their fates and were ready to go to Valhalla. We cannot change our fate, so the best course of action is accepting it and being prepared.

“Nothing good can happen to people who break their solemn vows.” A Viking never broke his vows no matter what

Viking warriors trusted each other in the field of battle. They knew that their kinsmen would have their backs no matter what. If a Viking gave you their word, they would hold to it until the end. An important lesson to learn here is never to break your promises.

“Gold is little comfort for the kinsmen dead.” Vikings cared a lot about their kinsmen

Gold was one of the most important things that the Vikings sought for. However, even the mightiest of the warriors knew that it is not worth it if your kinsmen die in the process. Always ask yourself if your end goal is worth the sacrifices made by people around you.

“Better to die with honor than to live with shame.” A Viking never ran away from a fight

All Viking warriors lived by this code. They would rather fall in battle than escape and live in shame for the rest of their lives. Always let your actions speak louder than words and make sure that you do good deeds. This way people will always remember you with honor and dignity.

If you can sum up the life of a Viking, it can be done with one word; battle. A Viking always loved to fight and naturally they have tons of quotes regarding battles. Below are some of the best Viking quotes about the battle.

“The brave man well shall fight and win, though dull his blade may be.” A Viking knew to keep his attitude positive

You can always accomplish your goals if you put your mind to it and have the right attitude. No matter how ill-equipped you are, you’ll always achieve something if you truly mean to.

“All a people need in order to rise up against tyranny is a leader bold enough.” A good leader can make a huge impact

Vikings were almost always outnumbered in their fights against the Saxons. But the reason that they kept on winning was that they had brave and bold men. One brave man can make a huge impact and change how the world perceives a particular thing.

“Let another’s wound be your warning.” Learn from others mistakes

Always learn from the mistakes of others. If you see someone else do something wrong, make sure to avoid that mistake in the future. This will keep you on the right track, and you’ll find success in your life.

“Bravery is half the victory.” Overcome your fear, and you will solve half the problems

Overcoming your fear is the most challenging step to take. But once you do it, you win half the battle. If you overcome your fear, you will find it easier to complete a task.

These were some of the best quotes said by the Vikings. Whether it is about family, battles, or quotes in general; Vikings always had an insight about things. Make sure to read all of them and tell us your favourite quote in the comments below.